Hostile Witness is a great legal thriller. If you like novels about the law by the likes of Grisham and Connelly, you'll never regret reading this book. And it's free! 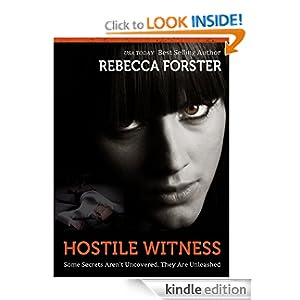 Josie Baylor-Bates is a relatively young lawyer who has purposely ducked out of the limelight. The last big case she won was three years ago, and it was a disaster. Now an old friend drops by to ask Josie to defend her daughter. Against her better judgement Josie takes the case, and it looks like a train wreck is heading down the tracks again. Amazing writing that I couldn't put down. Very highly recommended.
Posted by popnowlin at 14:29 1 comment: Links to this post

From the Ashes - Burns, Jeremy

From the Ashes was a free Friday nook book. If you're into conspiracy theories you'll love this story.

Jon Rickner's life is turned upside down when his brother Michael commits suicide. But Jon and his brother's fiancée Mara discover it wasn't suicide. They begin a search to find what Michael was working on that could make him a target for assassination. What they find is a conspiracy that's been covering up a disastrous decision the government made since before WWII. The question is, can they expose the truth before they become the next victims of this coverup. Highly recommended.

I really liked this book. However, once in a while I come across a good story that is buried in way too many words. This is one of the rare occasions when I wish I'd read the Reader's Digest Condensed version. The author clearly suffers from logorrhea.
Posted by popnowlin at 08:52 1 comment: Links to this post

The Grail Conspiracy is a new twist on the search for the holy grail. In this book it's been found. It's how it's being used that's interesting. 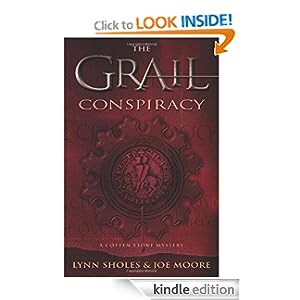 Cotton Stone is a reporter, and a good one, but she's something else she's not even aware of. When Cotton stumbles into an archeological dig in Iraq, she comes into possession of a strange artifact. She has no idea how this simple wooden box will change her life. She's drawn into a conspiracy of world wide proportions. If she survives she could be the key to it all. Highly recommended.
Posted by popnowlin at 10:56 2 comments: Links to this post

Hearts at Stake was a free Friday nook book. Every Friday Barnes & Noble has a nook book that's free for anyone to download. Even if you don't have a nook you can run the nook app on your computer or android device and take advantage of this free offer. Just check in on Fridays at The NOOK Blog.

Solange Drake is the first female vampire born in hundreds of years. That's turning out to be something of a problem. Solange turns 16 in a few days and she is the object of interest for a great many male vampires. She's also a major problem to the current de facto vampire Queen. Salonge and her best friend Lucky are in for some major trouble as this story closes in on that 16th birthday.

This is definitely a young adult book. I enjoyed it, but it's not a challenging read. The author's continued change of first person narrative between Solange and Lucky was distracting most of the time and didn't add anything to the story. The story was also cluttered with too many factions feuding and fighting with each other. On the whole I'd recommend it for young adults.
Posted by popnowlin at 16:23 1 comment: Links to this post

Graceling is an amazing novel. It's 99 cents. It's clearly priced to introduce you to a new author, but it's an introduction I'm very grateful for. If you like fantasy kingdoms, where good an evil are championed by heroes with powers that defy explanation, you'll love this book. This is a young adult book and I'd recommend it to my older grandkids. 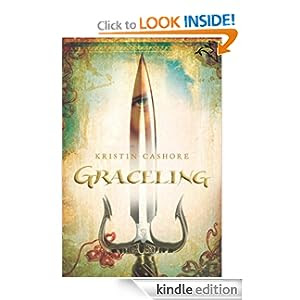 Katsa is a Graceling. Her special power, or grace, is fighting and killing. Katsa's grace first appeared when she was a young girl and killed an older cousin who made her feel threatened. Her uncle, the king of Middluns, has honed her to be his enforcer ever since. She's the greatest fighter in the Seven Kingdoms. But Katsa also heads the Council, a group dedicated to providing justice for the people of the Seven Kingdoms. Katsa's mission to rescue the kidnapped father of the Lienid king turns into a much bigger challenge than expected. One that could decide the future of the whole Seven Kingdoms. This is one of the best books I've read in a long time. Very highly recommended.
Posted by popnowlin at 11:51 1 comment: Links to this post

The Golden Acorn is the first book in The Adventures of Jack Brenin series. I've already ordered the second because I have to know what happens next. This is a great book to share with your kids, or in my case grandkids. And it's free! 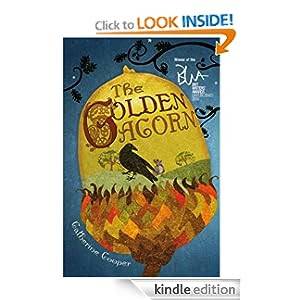 Jack Brenin was shipped off to his Grandfather's in England when his Mother passed away. He's sure he'll be bored to tears until he's hit in the back of the head with a golden acorn. That's when his adventures begin. Talking birds, rats, bats, dragons, and all manner of magical creatures populate this story. To make it more interesting, Jack learns he has to fly. A delightful read. Very highly recommended.
Posted by popnowlin at 23:24 3 comments: Links to this post

Weaving Destiny is the second book in The Soulkeepers Series. This time around the focus is on Malini instead of Jacob. More action and suspense. This is a great series. 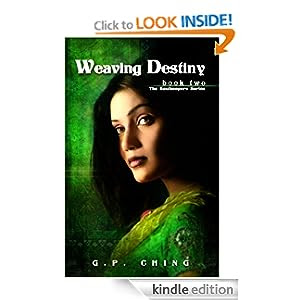 Malini figures out what her power is in this book. She goes from the group hanger on to the most powerful soulkeeper of all. But someone has to make the ultimate sacrifice to keep the town of Paris Illinois safe. I couldn't put this one down. Now I have to wait for the next book in the series to come out. Very highly recommended.
Posted by popnowlin at 10:33 1 comment: Links to this post

The Awakened: Book Two is the second book in the series. The Awakened: Book One was free, but I had to pay to read the second book, and gladly did so. This series is the kind you have a love/hate relationship with. You love the book and can't seem to put it down, but you hate it when a book keeps you up past 2:00 in the morning when you know you have to get up the next day. 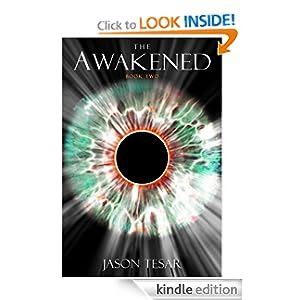 Kael survived the cliff at the end of book one and is now a man who's coming back to his birth place. But the Bastul he was taken from as a child is not the city he finds when he returns. The empire is being assailed from all directions by barbarians. He joins with a band of soldiers fighting to survive and eventually travels to the capital city of Orud where he meets the cause of all the kingdoms strife. His mother and sister, and his old mentor are all eventually in Orud. The threads of the story begin to draw together but there's still another book before the final conclusion. Very highly recommended.
Posted by popnowlin at 16:19 1 comment: Links to this post

The Detachment is a novel about political intrigue, where assassins are the tools of the trade. This book was 99 cents. An amazing bargain. 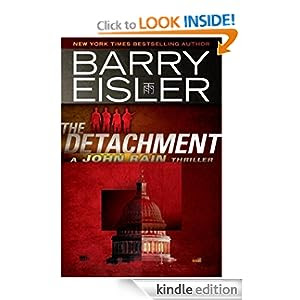 John Rain is trying to live an unobtrusive peaceful life in Tokyo, and retire from his life as a government assassin. But he's being watched, and that means his old life is coming to find him. Someone is about to make him and offer he can't refuse and drag him into a race to save lives and maybe the US constitution. I will be reading more John Rain novels. Very highly recommended.
Posted by popnowlin at 12:21 1 comment: Links to this post